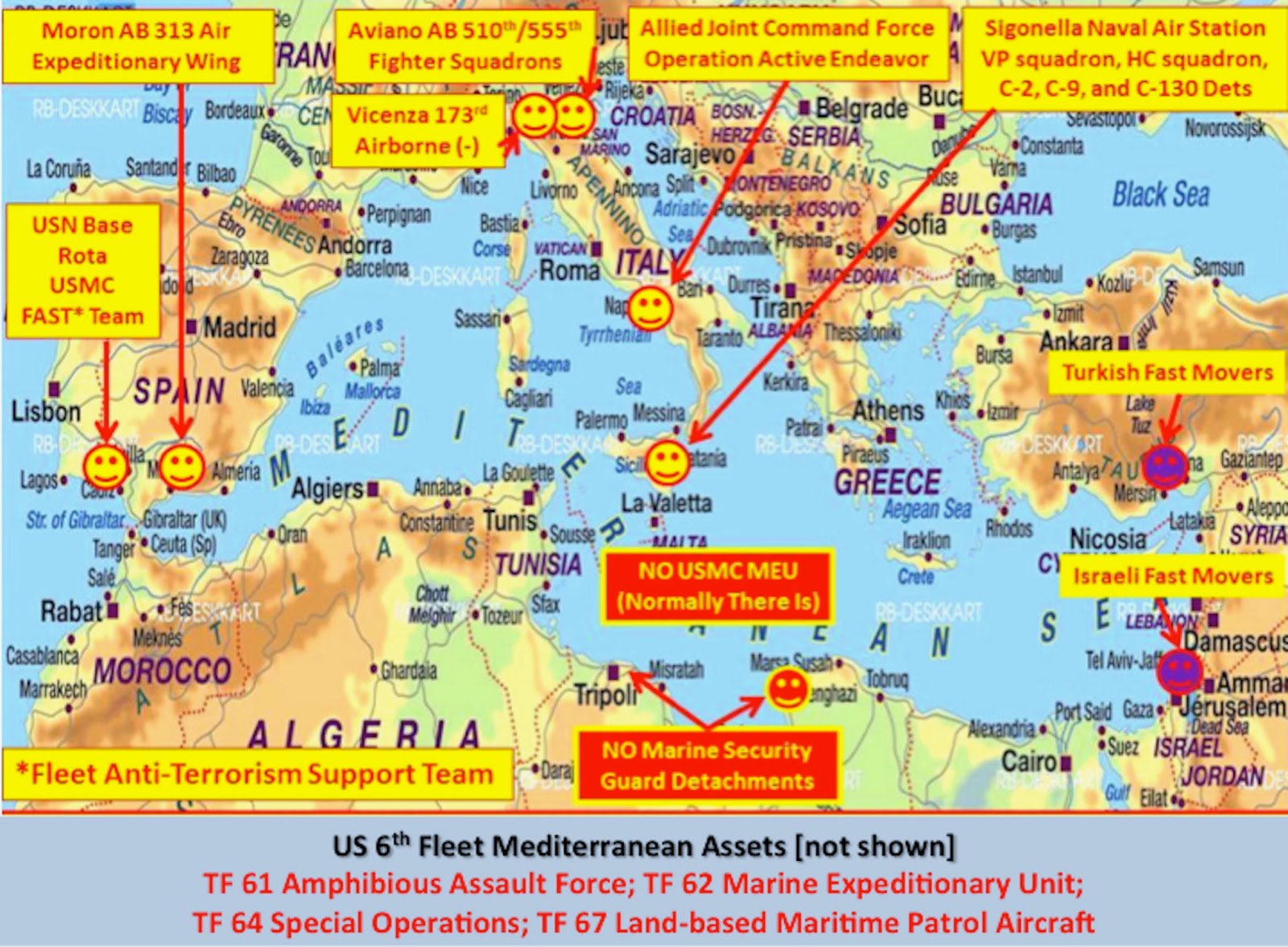 We’re posting this commentary by Phil “Hands” Handley [Colonel, USAF, (Ret)] who wrote this commentary in response to the announcements by Secretary of Defense Panetta and the Chairman of the Joint Chiefs of Staff that the closest rescue assets were 18 hours away in Fort Bragg, NC!  Colonel Handley, with considerable knowledge of the Air Force assets available, provides details of precisely what support the Air Force could have rendered.

[We’ve taken the liberty of adding to the map above many of the assets available in the area from the US 6th Fleet — all the Secretary of the Navy denies any US Navy craft were in the area — they were “deployed elsewhere”!]

He flew 275 combat missions, and flew operationally all but 11 months of his 26 year career in fighters such as the F-86 Sabre, F-4D, F4E, F15 Eagle, and even drove the C-130A workhorse into hazardous areas.

Unlike most of the obsequious, pusillanimous popinjays strutting the halls of the Pentagon today, his medals are real, and earned in actual combat; they include 21 Air Medals, three Distinguished Flying Crosses, and the Silver Star — so this man has credibility, more than we can say for any flag rank officer in the Pentagon today!

BETRAYAL IN BENGHAZI
The combat code of the US Military is that we don’t abandon our dead or wounded on the battlefield. In US Air Force lingo, fighter pilots don’t run off and leave their wingmen. If one of our own is shot down, still alive and not yet in enemy captivity, we will either come to get him or die trying.
Among America ‘s fighting forces, the calm, sure knowledge that such an irrevocable bond exists is priceless. Along with individual faith and personal grit, it is a sacred trust that has often sustained hope in the face of terribly long odds.
The disgraceful abandonment of our Ambassador and those brave ex-SEAL’s who fought to their deaths to save others in that compound is nothing short of dereliction-of-duty.
Additionally, the patently absurd cover-up scenario that was fabricated in the aftermath was an outright lie in an attempt to shield the President and the Secretary of State from responsibility.
It has been over 18 months since the attack on our compound in Benghazi . The White House strategy, with the aid of a “lap dog” press has been to run out the clock before the truth is forthcoming.
The recent testimonies of the three “whistle-blowers” have reopened the subject and hopefully will lead to exposure and disgrace of those responsible for this embarrassing debacle. It would appear that the most recent firewall which the Administration is counting on is the contention “that there were simply no military assets that could be brought to bear in time to make a difference” mainly due to the unavailability of tanker support for fighter aircraft.
This is simply Bull Shit, regardless how many supposed “experts” the Administration trot out to make such an assertion.
The bottom line is that even if the closest asset capable of response was half-way around the world, you don’t just sit on your penguin ass and do nothing.
The fact is that the closest asset was not half-way around the world, but as near as Aviano Air Base ,Italy where two squadrons of F-16Cs are based.

Consider the following scenario (all times Benghazi local): When Hicks in Tripoli receives a call at 9:40 PM from Ambassador Stevens informing him
“Greg, we are under attack!”
(his last words),
Hicks immediately notifies all agencies and prepares for the immediate initiation of an existing “Emergency Response Plan.”

At AFRICON, General Carter Ham attempts to mount a rescue effort, but is told to “stand down”. By 10:30 PM an unarmed drone is overhead the compound and streaming live feed to various “Command and Control Agencies” so everyone watching that feed knew damn well what was going on.
At 11:30 PM Woods, Doherty and five others leave Tripoli, arriving in Benghazi at 1:30 AM on Wednesday morning, where they hold off the attacking mob from the roof of the compound until they are killed by a mortar direct hit at 4:00 AM.
So nothing could have been done, eh?
Nonsense!
If one assumes that tanker support really “was not available”
what about this:
When at 10:00 PM AFRICON alerts the 31st TFW Command Post in Aviano Air Base, Italy of the attack, the Wing Commander orders preparation for the launch of two F-16s and advises the Command Post at NAS Sigonella to prepare for hot pit refueling and quick turn of the jets.

While in-route, the flight lead is informed of the tactical situation, rules of engagement, and radio frequencies to use.

The jets depart Sigonella at 1:10 AM with full fuel load and cover the 377 nautical miles directly to Benghazi in 0.8 hours, arriving at 1:50 AM which would be 20 minutes after the arrival of Woods, Doherty and their team.
Providing that the two F-16s initial pass over the mob, in full afterburner at 200 feet and 550 knots did not stop the attack in its tracks, a few well placed strafing runs on targets of opportunity would assuredly do the trick.
Were the F-16s fuel state insufficient to return to Sigonelli after jettisoning their external drop tanks, they could easily do so at Tripoli International Airport , only one-half hour away.
As for those hand-wringing naysayers who would worry about IFR clearances, border crossing authority, collateral damage, landing rights, political correctness and dozens of other reasons not to act — screw them. It is time our “leadership” get its priorities straight and put America ‘s interests first.
The end result would be that Woods and Doherty would be alive. Dozens in the attacking rabble would be rendezvousing with “72 virgins” and a clear message would have been sent to the next worthless P.O.S. terrorist contemplating an attack on Americans that it is not really a good idea to “tug” on Superman’s cape.

Of course all this depends upon a Commander In Chief more concerned with saving the lives of those he put in harm’s way than getting his crew rested for a campaign fund raising event in Las Vegas the next day.

It also depends upon a Secretary of State who actually understood “What difference did it make?”, and a Secretary of Defense who was watching the feed from the drone and understood what the attack consisted of instead of making an immediate response that “One of the military tenants is that you don’t commit assets until you fully understand the tactical situation.”

YGBSM! ( You Gotta Be Shittin’ Me)
Ultimately it comes down to the question of who gave that order to stand down? Whoever that coward turns out to be should be exposed, removed from office, and face criminal charges for dereliction of duty. The combat forces of the United States of America deserve leadership that really does “have their back” when the chips are down.

TO AVOID THIS HAPPENING AGAIN,

WHOEVER GAVE THE “STAND DOWN” ORDER NEEDS TO BE EXPOSED!!!!
Posted by Greg Davis at 12:29 PM